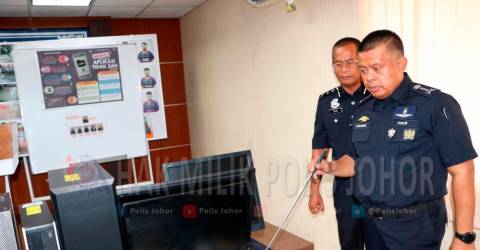 JOHOR BAHRU: Five men were arrested on suspicion of being involved in online gambling activities operating from a ‘call centre’ at the Tepian Bayu Apartments on Jalan Sultanah Aminah, Marina Cove here, yesterday.

Johor Police Chief Datuk Kamarul Zaman Mamat said all residents between the ages of 20 and 40 were arrested at 6 p.m. in a raid by a team from the headquarters’ D7 Criminal Investigation Department. of the Johor police contingent.

“The inspection revealed that the raided premises served as a call center offering online gambling activities through two websites, namely www.89rich8888.com and www.tgr138.com.

“It was also found that the syndicate had a daily collection of up to RM15,000 targeting customers in Singapore. The premises are believed to have been operating since March 2022,” he told a press conference here today.

“All the suspects were remanded in custody for four days from Wednesday (September 28) under Article 117 of the Code of Criminal Procedure.

“The success of this operation is the result of intelligence gathered by the police and complaints from the public. The public can report any information regarding online gambling activities to the nearest police station or Johor Police Operations Room on 07-2212999 or 07-2254677,” he said.

Meanwhile, Kamarul Zaman said that 308 people suspected of being involved in various drug-related activities were arrested in a special operation that was carried out across Johor from Monday, September 26 to midnight yesterday (Sept. 28) .

“All the drugs in question are estimated at RM40,903.50,” he said, adding that since January 1, the Johor Narcotics CID had arrested 10,903 people for various drug offences, involving seizures drugs worth RM12.3 million and drugs. syndicated assets worth RM7.47. – Bernama