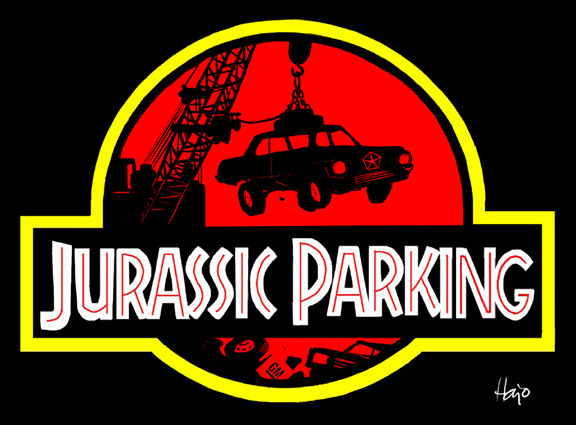 The concept of “parking” loses most of its mystique as you move past the dizzying days of a freshly minted driver’s license and take on the responsibilities of adulthood.

Where “parking” once meant fogged up windows at Inspiration Point, it means drudgery, unpleasant surprises, and keeping your “Spidey sense” in overdrive while navigating.

When I Googled “I hate parking lots,” a high percentage of conversation threads focused primarily on drivers’ concerns for their spotless vehicles — and the “hits” and darts of outrageous fortune.

One of the dangers indirectly concerns butterflies. A butterfly can flap its wings halfway around the world and cause dozens of abandoned shopping carts to stalk your unsuspecting vehicle. The danger is amplified if the cart has ever held a paperback or DVD of Stephen King’s “Christine” – it gets delusions of grandeur.

Don’t get me started on the inconsiderate sloths who abandoned carts in the first place. What’s the use of shopping at the health food store (for example) if it’s such an ordeal to see a task through to completion? (“You mean I have to put the capsules on my tongue??? And then swallow??? Don’t they have people hired to do that for me???”)

Car-to-car damage is another area of ​​concern. My 2010 Altima is showing its age so I’m not that worried about getting scuffs and scratches. But my nerves remain on red alert at the prospect of damaging someone else’s conveyance and dealing with all the hassle of police reports, insurance and moral dilemmas. (Should I skedaddle without leaving a word, or listen to a fit like “That sweet, innocent bumper was the only thing I had to remind me of my fifth husband”?)

Can’t get enough of tight squeezes? If I’m careful, suck in my guts, and let go, I can usually get in or out of my car without bumping into anything. But what about families with a backseat full of brash kids? If the parents don’t put the kids to sleep before they arrive, it’s an episode of “Wham! Bam!” without a hint of “Thank you, ma’am.”

I could certainly drop a few rude words about civil engineers reading the innards of salamanders and guessing the “optimal” width of parking spaces. Or maybe it’s more of a mix of math and philosophy, like crossing the math with “How many angels can dance on the head of a pin?”

Apparently these designers think you’re supposed to exit your vehicle via an ejection seat. But most people who could afford an ejection seat are going to hang out at Casino Royale, not Bubba’s Bait Basement.

Let’s not forget the scourge that is the pedestrian. Even without the distraction of cell phones, they are oblivious to traffic as they come to meander, jump, stumble, exit shops and offices. They certainly have no idea of ​​the presence of their impulsive young children. (“Oh, did I bring you?”) Yeah, I’m talking to you, lady. The dangling umbilical cord should have been your first clue.

Ah, maybe I’m being too judgmental. Maybe I should walk a mile in the shoes of those who angered me.

It’s half the distance I have to walk to the front door after getting a “safe” parking spot away from the demolition derby.